What, exactly, is this supposed to be? 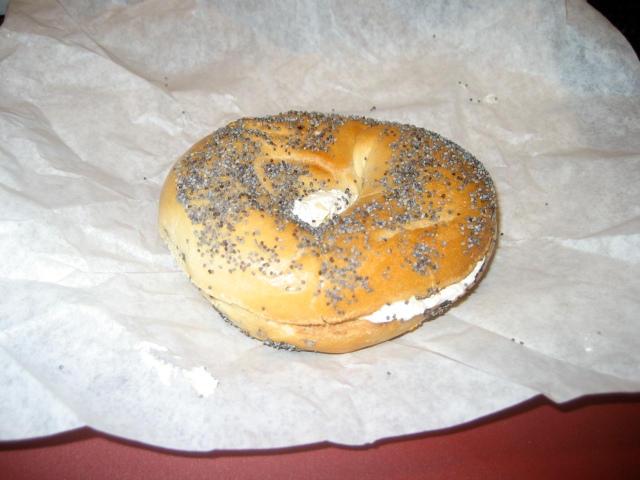 I’ve heard some people refer to San Francisco “bagels” as “rolls with holes,” but that’s not quite accurate. I honestly don’t know the technical specifications about how bagels are constructed, but in San Francisco it tastes like something went horribly awry.

I’ve heard it suggested that New York bagels taste the way they do (delicious) because of New York water, but that doesn’t make sense to me since New York water just tastes like water. And to be fair, so does San Francisco water.

The “bagel” shops here certainly look similar to bagel shops in New York. There’s typically a glass counter with a variety of “bagels” on display and a very nice person or two standing behind the counter. The only sign that something might be amiss is an often odd array of available types: “seeded” (everything without garlic and onion – whatever), “sun dried tomato” and (shutter) “blueberry”.

Also, there’s a much greater propensity for healthy toppings (like sprouts and avocados – which I must admit I do enjoy) and a complete absence of fresh nova or sable.

The other odd thing is that when they serve you the “bagel” they don’t cut it in half unless you ask!!! And I often forget to ask so I get a whole, round bagelish thing. And it’s just not the same biting into the outside crusty edge of a quasi-bagel. I’m admitedly not a physicist, but I think there’s some issue related to the surface area of the cut edge interacting with squishy cream cheese product.

To be fair, you can get a great piece of focaccia here, but it’s just not the same for breakfast. And tastes horrible with scallion cream cheese. 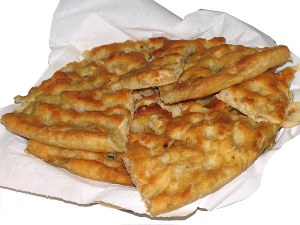 On February 5, 2008, after 15 amazing years in New York City, I got married, changed careers, and moved out to San Francisco. All within a three-week period, and with very little preparation. This blog is for those of you who follow me out to San Francisco (or have been here for a while and are still trying to figure this place out). You're not in Kansas anymore Dorothy.
View all posts by adamahata →
This entry was posted in Background Information and tagged bagel, food, San Francisco, Weird. Bookmark the permalink.

2 Responses to What, exactly, is this supposed to be?