If one of these grownups happens to be a member of a union, and they happen to make their livelihood in New York City, then one of the grownups will often illustrate their frustration by inflating a terrifying 20’ tall rat in front of the offending entity’s place of business. These nasty and frightening effigies are a mainstay to New York City life, often encountered many times throughout the day around the city. I don’t know who the original artist is, but they have done a horrifyingly good job bringing these giant, diseased, pustule-ridden, teeth barring rodents to (bigger than) life.

Now just because San Francisco is a cute little “city” doesn’t meant that people here don’t also have disagreements (yes they do!). Taking a cue from their grittier cousins in the east, San Francisco-based unions have their own giant inflatable icon… a big kitty cat.

Evidently the purpose in San Francisco is not such much to humiliate or strike fear into the hearts of their adversaries (that wouldn’t be very nice, would it?), but instead to entertain and evoke a “how cute” reaction.

You see, San Francisco is not just weird…it’s adorable too! 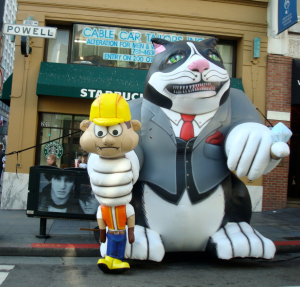 On February 5, 2008, after 15 amazing years in New York City, I got married, changed careers, and moved out to San Francisco. All within a three-week period, and with very little preparation. This blog is for those of you who follow me out to San Francisco (or have been here for a while and are still trying to figure this place out). You're not in Kansas anymore Dorothy.
View all posts by adamahata →
This entry was posted in Seen on the Street and tagged Cat, New York, New York City, Rat, San Fran, San Francisco, Union. Bookmark the permalink.

2 Responses to You Dirty Cat