Posted on September 3, 2009 by adamahata

Bisecting the (relatively) busy Northeast corner of San Francisco is one of the oddest streets in the world. While its turn-of-the-century name evokes an quaint, commerce-oriented, crafty vibe – the reality is a large, peculiar thoroughfare that illogically rips diagonally through an otherwise sensible urban-planned grid. Virtually impossible to avoid and even more difficult to navigate, San Francisco’s busiest road takes travelers on a bewildering journey from opulence, to fabulousness, to squalor and ultimately to a happy tourist wonderland.

Allow me to introduce: 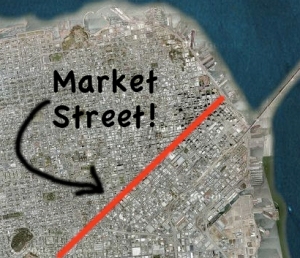 One Street to Rule Them All

Warning: often overrun with tourons, I suggest not going between the hours of when-they-open and when-they-close.

Following Market Street south-by-south-west-ish, leads you to on a fantastical journey: The first neighborhood you’ll come to is the Financial District. This is where a handful of professionals gather very early every morning so they can be on the same time zone as the rest of the world.

Next you’ll come to Union Square (no relationship to New York’s real Union Square), a shopper’s mecca where you can momentarily feel like you’re in a miniature version of a normal American city. There’s super-cute versions of pretty much every store your heart desires, including a little Apple Store, a tiny Barneys, a teacup Bloomingdale’s and many more!

After a brief respite into the depths of micro-consumerism, Market Street plunges into the Tenderloin, a neighborhood (if it deserves that distinction) that both frightens and fascinates. Drug addicts shoot heroin, smoke crack with impunity and relieve themselves on the streets while San Franciscans and visitors alike traipse through the beleaguered alleys in search of the  theaters and live music venues peppering the area.

After you escape from the Tenderloin you’ll find yourself in the Civic Center – basically an extension of the Tenderloin but with large civic buildings, opera and ballet houses replacing the tenements, theaters and music venues. A bit further on leads you through a nondescript no-mans-land before Market Street joyously enters the Castro: a 24-hours-a-day / 7-days-a-week / 365-days per year gay pride celebration! The Castro makes Chelsea look like the upper-west-side and the Christoper Street shops seem like a conservative Pottery Barn.

The Castro is also the Nepal of Market Street, the last bastion of civilization and decent weather before the street simultaneously rockets skyward and abandons all linear characteristics. At the corners of 17th and Castro, Market Street meanders up into the foothills of Twin Peaks before it disappears completely into the fog…

A fitting end to one of the world’s weirdest streets.

Next week I’ll be posting about attempting to navigate on and around Market Street. Until then, please…be careful.

On February 5, 2008, after 15 amazing years in New York City, I got married, changed careers, and moved out to San Francisco. All within a three-week period, and with very little preparation. This blog is for those of you who follow me out to San Francisco (or have been here for a while and are still trying to figure this place out). You're not in Kansas anymore Dorothy.
View all posts by adamahata →
This entry was posted in Background Information, Seen on the Street and tagged Castro, Civic Center, Ferry Building, Market Street, Tenderloin, Union Square. Bookmark the permalink.

5 Responses to It Ain’t Sesame Street